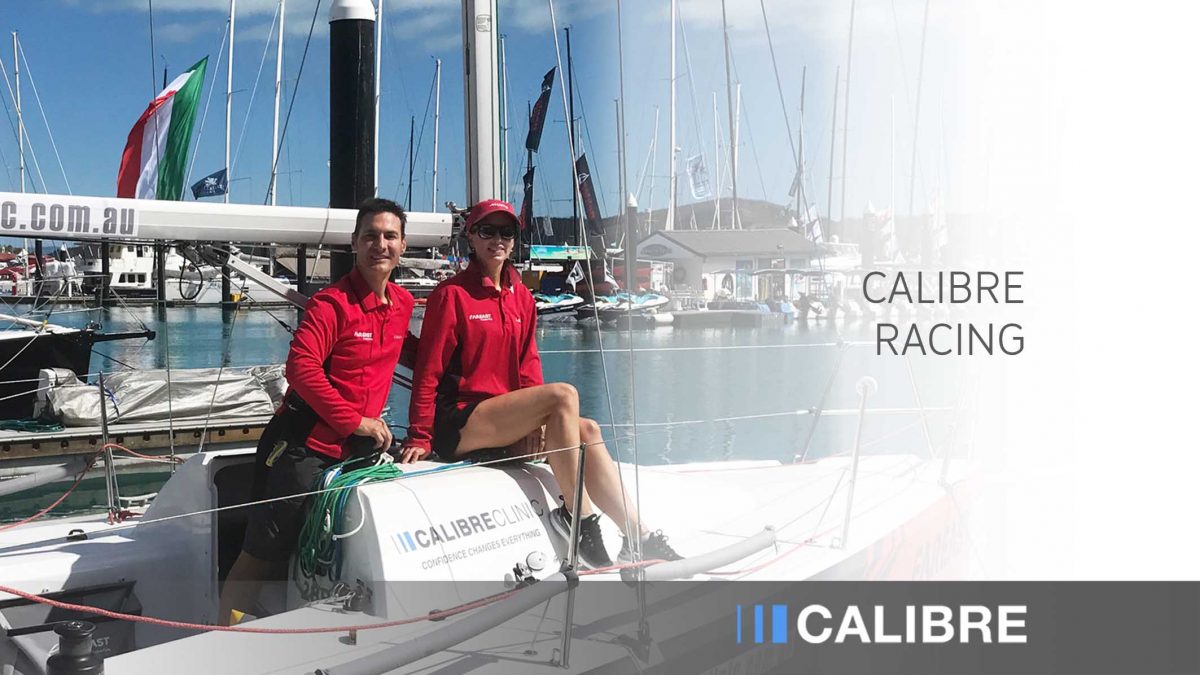 Audi Hamilton Island Race Week 2017 was the first outing for CALIBRE Racing. Five of us from Perth travelled to Hamilton Island for this years sailing regatta. Myself on bow, my wife April helm, Adam tactician, Dean trim, Danielle on main and Gerrit the distributor of FarEast Yachts Australia in the pit (www.fareastyacht.com.au). Thanks to Gerrit for supplying the FarEast 28R – a high performance 28’ racing yacht. It was a great little boat but we were 4’ shorter than the next smallest yacht and 20’ shorter than some. We learnt that yes, size matters!

Unfortunately for family health reasons April and I were not able to be there for the first three days of racing. The first day had 25+ knots of wind which was a bit of work upwind but great fun downhill. See the video from day 1 highlights with the guys getting high teens of boat speed. The next couple of days, the wind was not enough to keep the boat planing downwind so not able to get great results. We arrived on the lay day and went for a training sail in light winds. Thursday was to be our first day of sailing but the start kept getting postponed because of insufficient wind and eventually was cancelled – so we went out for a training sail in Dent passage with the tide coming through. Quite a few people commented on us being out there getting pushed strongly sideways in the tide and going upwind and downwind on the same line (not normal without the tide).

On Friday we got to do 2 races. First a windward/leeward in around 20kn of breeze. We had a good start but got over run by the longer waterline length boats into wind. Because races are started at 5 minute intervals we are put there with the big boats and had Wild Oats XI cross just in front of us followed by Wild Oats X with HRH Crown Prince Frederick a while later. We scored a 5th on handicap that race. The second race was a longer round the island race lasting about 3 and a half hours. Initially there was enough wind to plane (max speed I saw was 17kn) and we passed about 5 boats to score our best result of 2nd and second overall for the day.

Saturday was the last race with good breeze to start. It was a down wind start so we crossed the line with the spinnaker up and rounded the top of Dent island in third place. The next couple of hours were hard work pounding into the breeze and waves. We did see some whales which was nice. But as we approached the rounding of Lindeman Island the breeze began to die so although we were able to carry the speaker all the way to the finish line we were never really able to get up and plane and hit the speeds we need to catch the big boats. Sixth on handicap and finishing 5th out of 11 overall. In the after sailing activities (drinking beer mostly) I got to explain what CALIBRE was all about. Not your usual yacht sponsor! But got a bit of interest. The media was more interested in my wife ‘driving’.

A big thanks to FarEast Yachts Australia www.fareastyachts.com.au for making the 28R available to us. Gerrit says they are considering building a 37’ version – as we say at CALIBRE Racing bigger is better so we look forward to hearing more.